Prints of my work will be available.

Zabi (pronounced "zobby"), my beloved dachshund, turned 17 on June 29th, 2018. I lost him on July 5th. I held him, wrapped in my father's fleece jacket, as he passed away.
As a pup, Zabi was known as the "Design Dog" – I was teaching graphic design at Indiana University South Bend, and he would come to work with me. He was so tiny then... and he would curl up and nap next to my keyboard while I worked at the computer.

Zabi loved to run, and bad weather never stopped him. Rain or snow, he'd run around his yard and make sure everything was in good order, snarfing up mulberries in the summertime.

He was a "babysitter" dog and loved puppies. When my other dogs – Tickle and Weema – were pups, he would lie down so as not to sit on them accidentally, and would play with them so very gently. He was the sweetest dog I've ever known.
As Zabi grew older, he lost his hearing and took to sleeping in the pantry because I think felt protected there and was less likely to be startled. The night that he didn't come home, Tickle kept walking into the pantry and looking for him.
I will miss him every day.
Posted by Karen Ackoff at 7/08/2018 No comments: 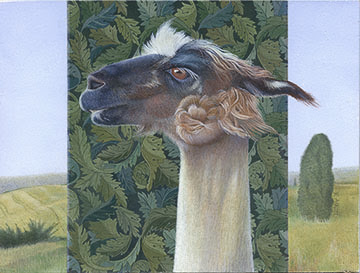